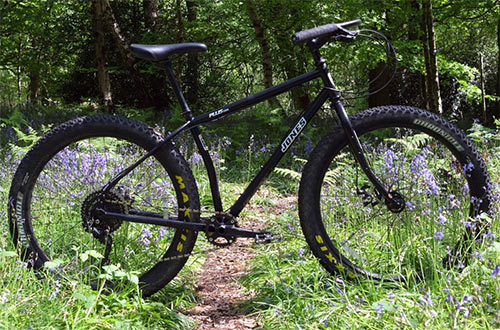 The Jones Titanium Spaceframe Plus LWB frame and fork set is the smoothest-riding of the already smooth Jones Plus LWB line!

The titanium Spaceframe Plus LWB shows that it really is possible to make that bike even more comfortable while also lowering the standover for greater maneuverability!  Whether you want a bike to ride around town with more comfort than you would have thought possible, to shred your local singletrack, or to ride to the ends of the earth, this just might be the one!  It's hard to overstate just how smooth and versatile this frameset is.

This frame is all about function.

The 3D Spaceframe design was inspired by and born of riding on the tight, technical trails in the woods here in Southern Oregon, and each step in its development  has been a functional refinement, so while some might speculate that the frame is supposed to look interesting, Jeff's only aim with the Spaceframe has always been to make a better bicycle.  The frame's upper tubes are long, thin, braced, and curved in just the right way to allow them to flex and keep the bike vertically compliant; the downtube, chainstays and seat tube are oversized to keep the bike torsionally stiff.  The low-slung top tube arrangement keeps the bike out of your way in technical terrain, so you can focus on riding.

This is a frame, fork, EBB (bottom bracket), front and rear TA bolts, water bottle bolts, clips, and standard derailleur hanger.  If you would like a single speed or Shimano Direct Mount hanger, get them here!

Are you interested in a complete bike or rolling chassis? Please send us an email or give us a call!

In the first blog post about the Jones Plus, Jeff says, "I did not design this bike based on market research, a reaction to what other people were making, or because people were suggesting I make ‘this’ bike or ‘that’ bike – their idea of what I should do next. I made this bicycle because I wanted it and I think many others will love it too. I realized that I do not need or want a bike that has the absolute shortest wheel base possible for every ride, and I knew that you don’t need to have a steep head or seat angle to have a responsive bike that is fast, efficient and comfortable.

I designed my 29er bike years ago with a slacker seat tube angle, slacker head tube angle, shorter reach, lower BB and more fork offset than what was considered correct and normal at the time. I did this for a better ride based on what I had learned, not because it was popular. Nowadays many 29ers have more fork offset and slacker seat tube angles etc. Some have even branded and marketed this change in geometry… I never named my geometry, but if I did, let’s call it “JJ1 Geometry”, then this Jones Plus has “JJ2 geometry”. I spent hours working on it – centering the rider, considering the BB height, the angle and offsets, the rake and trail – the ride is everything.

People might try and simplify it – “it’s just a long wheelbase Jones with 29+ tires” but it isn’t. It’s so much more. It is NOT slow handling. I’ve done so much work to make it still ride the way I want a bike to ride. Hours of geometry drawings and thinking. Notes and testing. This is really even more of a ‘rigid specific geometry’ for a ride that is much more comfortable and stable yet still with very quick handling. It is balanced in a way you wouldn’t expect. It’s big but feels right. You ride very much in this bike. There’s no roughness, no “I’m gonna crash” sensation or fears. It’s just smooth! And it climbs. If you stand there’s no wheelie. It’s planted. It delivers excellent traction and a huge sweetspot (and I don’t mean the tire contact area  – I’m talking about the big space for the rider to move around (in the bike) and still have their position, the grip and the power transfer working for them).

The Jones Plus LWB is a bike for riding fast, slow, the rough with the smooth; safely, aggressively, laid-back or raging; with a big load or stripped to the bare essentials; on road, dirt, mud, snow; in the mountains, on the flat lands, around town or across the county; around the world or your local loop; for getting rad or just getting away. It sets a new standard for bikepacking yes, but it’s so much more than that – it’s a bike for technical trails and big trips. It really does it all. I’m really excited by this bike. It’s good."

Jones Titanium Spaceframe Plus (Available in Small, Medium, and Large: all for use with 29+ tires)

• Unique Jones Geometry frameset – frame and forks designed together as one
• EBB For geometry adjustment and single speed chain tension.
• 68mm bottom bracket width
• Titanium Spaceframe for excellent standover clearance, vertical compliance, and torsional rigidity.
• Titanium Truss fork for light weight and precisise handling.
• 3AL-2.5V Titanium tubing for a comfortable ride, light weight, and great durability
• Jones TA bolts front and rear  are simple, reliable, light, and low-profile
• Excellent clearance for 29+ tires (10mm+ clearance either side with a 29+ tire – with 29er tire you can get a palm in between the tire and stays)
• Ample chainring/stay clearance
• 148mm TA rear end-increased chain/tire clearance allows you to use all 11 and 12 speed drivetrains with the widest 29x3" tires.
•51 mm IS disk brake tab
• TIG welded
• Multiple rear rack and fender mounts for the best rack/fender/tire size fit (extra bosses allow you to have the rack at a height to suit the tires/wheels) allowing for a wide range of configurations.
• Triple bottle bosses on top of the downtube--for mounting cages such as Salsa Anything cage OR a standard 2 hole water bottle cage (medium and large sizes also have a standard water bottle mount on top of the downtube, near the headtube).
• Triple bottle bosses underneath downtube --for mounting cages such as Salsa Anything cage OR a standard 2 hole water bottle cage.

• Rider height between 5' and 5'8" would fit the small Jones Plus LWB Spaceframe well.  Standover height is approximately 26.5".

• Rider height between 5'7" and 6'2" would fit the medium Plus LWB Spaceframe well.  Standover height is approximately 27.5".

• Rider height between 6' and 6'6" would fit the large Jones Plus LWB well.  Standover height is approximately 28.5".

Over the years, Jeff has updated his framesets as better wheel sizes have become available.  When 29" wheels arrived, he immediately made the switch and adapted his geometry to make the most of the larger size.  He could see that they were obviously better with their larger diameter that let them roll over obstacles more easily and translated into a ride that was faster, smoother, and more fun (read a  2008 Dirt Rag review here, and another experience story from the same time here)!  This was a major turning point for Jeff, because it was after his first ride on the new 29" wheels that he realized that with the larger wheel size, more upright position of the Jones Geometry, and no suspension, he had a higher performance bicycle than ever before.  From that point on, Jeff has been committed to exploring the possibilities of the high-performance, non-suspension bicycle.  In the years after 29" wheels became available, Jeff continued to seek out the largest tires he could get in the wheel size—pairing them with wider rims to get higher air volume and the ability to run lower tire pressure without having to worry about having a tire roll off the rim.  Jeff’s first experiment with a long wheelbase geometry, which would eventually become the Jones Plus LWB (check out this video for more on the Plus LWB), was a simplified (straight tubed) Spaceframe design that became known as the Long Ranger (check this blog post for more on that).  It was built around 50mm wide rims with the widest tires he could get (this is before 29x3" tires became available).  Finally, with the advent of 29x3" tires, Jeff took what he had learned about the benefits of the larger wheels and how to make the best use of them and combined that with what he had learned from the Long Ranger, to develop the new Jones Plus in 2014 (later to become known as the Jones Plus LWB).

Ever since Jeff first developed the Jones Plus, he wanted to make one out of titanium in his Spaceframe design, but because of how smooth the ride of the Plus LWB already was, he decided that the greater framepack capacity, lower weight, and lower cost of the Diamond frame design should make it his first offering in that geometry, so the Spaceframe design has taken a while to make it to production.  Even though he decided to make the first couple of iterations of the frame in the Diamond frame design, he hoped to be able to someday bring the inimitable ride of his Titanium Spaceframe to the Plus LWB geometry because he knew that in order to get the absolute best ride, the Titanium Spaceframe was the way to go.

Seen from above, the three-dimensional aspect of the bike becomes clear, and it's this this that gives the bike its balance of vertical compliance and torsional rigidity by creating triangles as seen from all sides to brace it in three dimensions.   While the spaceframe design is great for technical terrain because of its extra standover clearance, its inherent vertical compliance, combined with the Jones Geometry, makes it a truly exceptional gravel, touring, and general-purpose bike and that's what Jeff designed it to be: a great bicycle, for bicycling!  For more specific information on the Spaceframe design, check out this video.

The frame has a 67.5 degree head tube angle with 76mm of fork rake/offset for a short trail measurement so the handling is quick even with such a slack head angle. This is twice as much fork rake as many 29ers had. The 71 degree seat tube angle can be used with a straight seatpost and will give a similar seating position as the 72 degree seat tube angle with a set back post on a Jones 29. Tall riders or riders that want to sit further back may want to use a set-back seat post. The chainstays are 19″.

This new 23" Plus size works out having an even shorter effective top-tube than the Jones 29 (which has a 23" top tube as well) because of the Plus's slacker seatube angle.  For reference: if it had the same seatube angle as a Jones 29, it would actually work out as having closer to a 22" top tube, which is just to say that it's shorter and smaller, even though the top tube length is stated as the same length.  This short reach, combined with the low standover of the Spaceframe design, brings the inspired ride of the Jones Plus to smaller riders who wouldn't have enough standover on the Diamond frame design.  A short wheel base is not the only way. Long has many benefits.